The Super Cyclonic Storm AMPHAN had hit the coastal areas of West Bengal on 20th May 2020 evening with a wind speed of 185 kmph which killed more than 87 people and ravaged Kolkata and several parts of West Bengal as it left behind a trail of destruction by uprooting trees, destroying thousands of homes and swamping low lying areas of the State. South 24 Parganas and North 24 Parganas districts were among the worst affected by the cyclone, due to the landfall near these districts. Embankments of several villages suffered extensive damage.

In this backdrop, FADV and its partners jointly did a Rapid Assessment of the damages and loss in the 5 Gram Panchayats namely Kalitala, Gobindokati, Jogeshganj, Sahebkhali, and Dulduli of Hingalganj block in North 24 Parganas and Langalberia Gram Panchayat of Sonarpur Block in South 24 Parganas, in post-cyclone situations. Among the 979 households covered under the assessment, 76.62% of the houses were damaged by the Cyclone. 42.83% of households had to reduce spending on Healthcare or medication, due to lack of money. 46.76% of the households had to limit the portion size at mealtime. 42.24% of the households had to restrict consumption by adults in order to feed the children. 56.6% of households faced scarcity of food and other basic amenities.

The lockdown followed by the cyclone had made their lives more complex in terms of livelihood. With the Coronavirus pandemic shutting down the business and limiting mobility, villagers did not have the option of moving to other places in search of work. The sudden lockdown due to  COVID-19  left many with no work,  like  Priyanka  Gayen’s parents.  Priyanka is a  student of class  9  and is supported under the  FADV supported sponsorship project.  Her parents work as daily wage laborers.  Prior to the lockdown,  her father,  Gurupada  Gayen, used to earn around  4000  INR  per month working as a mason. Her mother Usha Gayen earned around 2000-3000 INR per month. As soon as the lockdown was declared,  they were left with no work but tried to get along by selling  Guavas from their small  Guava Garden, until it was destroyed by the Cyclone Amphan.  It was after the Cyclone, that they started to fear starvation.  Their house was damaged too. They borrowed 5000 INR from a relative. They used a part of it to mend the house and used the rest to start selling vegetables,  door to door on a  cycle van.  But soon the money was spent as her father fell ill. FADV’s  Cyclone  Amphan  Response initiative supported  Priyanka and her family to survive the tough time by reviving the business of selling vegetables.  FADV  through the local partners provided  Conditional  Cash  Transfer support of  4625  INR  to them to restart the business of selling vegetables. 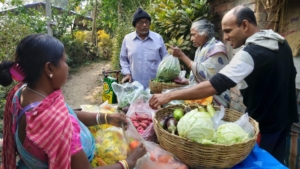 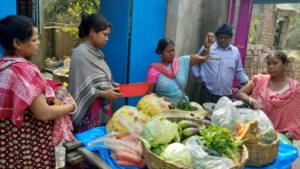 FADV’s support for livelihood recovery and promotion is a process to sustain the livelihood provisioning initiative carried out under the  COVID-19 Response Projects. Priyanka’s mother is earning around 200-250 INR  each day,  like more than  400  other families who were provided with  Cash Transfer support from FADV. Her mother, Usha says, “We are thankful to FADV for this life- saving support to us, during this difficult time”

FADV’s intervention focused on ensuring livelihood recovery and shelter reconstruction. Like Priyanka’s family, 3889 people from 979 families were supported under the project with conditional and unconditional cash transfer intervention.